From the Pastor’s Pen

The Pastor at St. Nicholas Episcopal Church publishes a newsletter — The Anchor — weekly. Here is the latest:

From the Pastor’s Pen:

This coming Monday, the 15th of August, is another feast day on the Church’s calendar.  It is the Feast of Saint Mary the Virgin.  Mary was a child of Nazareth and the wife of a craftsman named Joseph.  Their first-born child was a son whom they named Joshua, or as we know it Jesus.  In his Gospel account, Luke makes it clear that this child was God’s gift for humanity, the one in whom the Kingdom of God would be revealed.

In the sixth month the angel Gabriel was sent by God to a town in Galilee called Nazareth, to a virgin engaged to a man whose name was Joseph, of the house of David. The virgin’s name was Mary. And he came to her and said, “Greetings, favored one! The Lord is with you.” But she was much perplexed by his words and pondered what sort of greeting this might be. The angel said to her, “Do not be afraid, Mary, for you have found favor with God. And now, you will conceive in your womb and bear a son, and you will name him Jesus. He will be great, and will be called the Son of the Most High, and the Lord God will give to him the throne of his ancestor David. He will reign over the house of Jacob forever, and of his kingdom there will be no end.”

Mary is hesitant, uncertain.  But her faith and obedience lead her to make a monumental declaration: Here am I, the servant of the Lord; let it be with me according to your word.  Her words are the model words for all who acknowledge her son as Lord of Lords, and King of Kings.

From the Pastor’s Pen:

We are now entering Lent and moving to the Cross.  During the Ash Wednesday Liturgy, the celebrant, on behalf of the Church, invites the congregation to, the observance of a holy Lent, by self-examination and repentance; by prayer, fasting, and self-denial; and by reading and meditating on God’s holy Word.  Each of us will decide individually how to go about this.  Some of us will give something up, some of us will take something on, some of us will practice extra acts of piety.

There are also ways we can join with others in our observance of a holy Lent.  The first is our 12 PM liturgy for Ash Wednesday.  During the course of this liturgy, we will acknowledge our need for repentance with the imposition of ashes on our foreheads.  This is an outward and visible sign of contrition.

The second way is the Wednesday evening 6:30 PM praying together the Penitential Order via ZOOM beginning on the 9th of March.  Information about this follows.

The third way is by joining the Thursday morning Adult Study Group at 10:30 AM beginning the 10th of March.  On four Thursday mornings, we will walk in Jerusalem on the Via Dolorosa, the way of the Cross.  Our walk, of course, will not be a physical one.  Rather, it will be one of prayer, meditation, and reflection.  Information about this also follows.

In closing, in light of world events, I urge each of us to be mindful of John Donne’s admonition:

No man is an island,
Entire of itself,
Every man is a piece of the continent,
A part of the main.
If a clod be washed away by the sea,
Europe is the less.
As well as if a promontory were.
As well as if a manor of thy friend’s
Or of thine own were:
Any man’s death diminishes me,
Because I am involved in mankind,
And therefore never send to know for whom the bell tolls;
It tolls for thee.

Pray for yourselves, for others, for the world as you keep a holy Lent.

Please check back in the future for additional upcoming events. Call Church for more info. 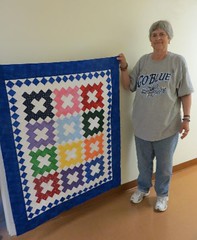